The shameful history of U.S relations with Haiti

As is the norm in the modern-day news cycle, there have been many unsettling images floating around as of late. From chaos in Afghanistan to wildfires tearing across the world, it’s easy to become numb to the events happening around us. However, if there’s one image that should stand out in everyone’s mind, it’s U.S. Border Patrol agents chasing Haitian migrants around on horses.

What makes this scene so unsettling isn’t the complete lack of empathy shown towards people escaping unimaginable horrors. Nor is it the depressing reality that the southern border is becoming increasingly militarized—often in ways that violate basic human rights.

It’s the fact that the actions of the United States have led to the dire situation in Haiti today. And instead of accepting that and helping the men, women, and children in need of desperate and immediate assistance, the U.S. continues to treat them as inhumanely as possible.

The history of Haiti is full of tragedy, but it’s also full of hope. Through understanding it, it becomes clear that the U.S. shouldn’t just help the Haitian people. It owes them its support.

Christopher Columbus was the first European to arrive on Hispaniola, the island that contains the present-day countries of Haiti and the Dominican Republic. Upon arrival, he found a region occupied by advanced and complex native societies—societies which he, and others, quickly began to dismantle.

Through this destruction, Hispaniola became one of the first Spanish colonies in the Caribbean. During the 16th century, it even served as a staging point for expeditions to Mexico and other parts of the Americas.

Within a few decades, warfare, enslavement, and disease had killed nearly all native Taino people. This forced the Spanish to turn to a new labor source: African slaves. The first enslaved people reached the Americas via Hispaniola in 1502. The Atlantic slave trade would continue for hundreds of years after, condemning millions of people to a life in chains.

Towards the latter half of the 17th century, Spanish power and influence in the Americas began to wane. As other European forces began to grow stronger, Spain chose to relinquish part of Hispaniola to France. In 1659, the French founded the colony of Sainte-Domingue on the west side of the island.

Over the next century, the French colony became extraordinarily rich. Slave labor supplied European countries with coffee and sugar—delicacies that they couldn’t get enough of. By the end of the 18th century, around 500-700,000 slaves toiled away on French plantations.

Slave rebellions had occurred throughout the 18th century, but it wasn’t until the French Revolution began in 1789 that slaves and free people of color launched the Haitian Revolution. More than a decade later in 1804, they finally achieved victory. They chose to name their new country Haiti, which meant mountainous in the indigenous language.

Unsurprisingly, the early years were difficult for the newly independent island nation. Internal strife threatened to tear the republic apart, and conflicts with the neighboring Dominican Republic persisted until the 1870s. On top of this domestic turmoil, the rest of the world continued to eye the riches of Haiti. To access them, they began vying for control over the country.

Through marriages, public development, and high-interest loans, Germany managed to gain an influential hold over Haiti in the late 19th century. Soon after, it began trying to exert influence over the rest of the Caribbean.

These power grabs angered the United States, which saw German influence as a threat to its economic activity in the Western Hemisphere. To protect American businesses, the U.S. bought out the Haitian national bank, then transferred the country’s gold reserves to the banks of American investors. To further protect its financial interests, the U.S. also helped Jean Vilbrun Guillaume Sam become president in 1915. 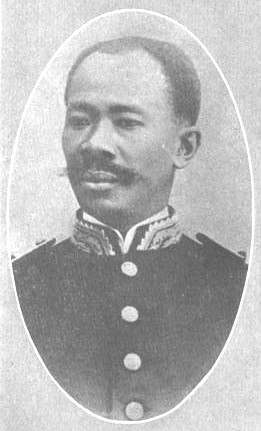 Sam, an army commander, quickly became a dictator, executing hundreds of political prisoners. His actions enraged the Haitian people, and in July of 1915, a mob rose in revolt. Despite seeking refuge in the French embassy, the rebels broke in and killed him.

This incident served as the excuse the U.S. needed to take a more direct role in the island nation’s affairs.

On July 25th, 1915, U.S. President Woodrow Wilson sent 330 marines to seize control of Port-au-Prince. He also took measures to rewrite the Constitution in a way that protected U.S. financial control over the island.

In response, several Haitian groups rose in revolt, plunging Haiti into a period known as the Caco Wars (Caco being the peasant militia that composed the majority of the rebellious bands). The skirmishes and battles the U.S. occupation brought to the island didn’t end until 1934, when the marines left.

In September of 1915, the U.S. created the Haitian-American Convention. This treaty gave the United States complete control over the security and economic wellbeing of the island. It also provided the U.S. government with veto power over all parts of the Haitian government, effectively converting the country into an American puppet.

Six weeks after the start of the occupation, U.S. forces also seized control of Haiti’s banks and treasuries. To further protect its economic interests, the U.S. mandated that 40% of Haiti’s national income went to repay American and French debts. This direct control over Haitian finances continued until 1947.

Despite occurring less than a century ago, it’s tempting to sweep these atrocities under the rug and classify them as ancient history. Unfortunately, U.S. destabilization efforts have continued to this day.

At the height of the Red Scare, the U.S. threw itself into two major conflicts: the Korean War in the early 1950s and the Vietnam War a decade later. However, in an effort to stop the spread of communism, the U.S. secretly funded anti-communist parties in dozens of countries, triggering coups and violent revolutions in countries as far apart as Chile and Iran. Haiti wasn’t spared.

In 1957, the U.S. chose to support a Haitian dictator: Francois Duvalier. He and his son ruled Haiti with a solid anti-communist stance until the 1990s, when uprisings ended their rule. Haiti then elected a democratic leader, Jean Bertrand-Aristide, but less than a year later, a coup toppled the newly-elected leader’s government. Unsurprisingly, leaders and insurgents received funding from the CIA.

In 2001, Aristide came to power once again, but soon after, another coup forced him out of office. After that, in 2010, the Obama Administration pressured a popular presidential candidate, Jude Celestin, to withdraw from the Haitian national election.

Since then, earthquakes and other natural disasters have further battered Haiti. In August of this year, a magnitude 7.2 earthquake struck the country, killing thousands and causing over $1 billion in damage. That, along with another suspicious coup that occurred in July, caused the latest “migrant crisis.”

While the U.S. government may have been able to get away with atrocities in the past, times have changed. Today, modern technology makes it easier than ever to showcase horrors that would previously have occurred in secret, especially those happening inside the country. Anyone with a television or smartphone can now see how the United States treats people fleeing the devastation it has caused.

In a video put out by Al Jazeera, a migrant named Nicolas explains that many migrants are trying to carry food, sanitary supplies, and medicine from Mexico to their families on the U.S. side of the border. He explains that they have absolutely nothing. He and the reporter also discuss how the U.S. is sending planes full of asylum-seekers back to Haiti. Nicolas explains:

“What kills me about that is that everyone knows what we Haitians are going through. There’s no president. Crime is high. Students can’t go to school. There’s no work. The economy is down. People can’t put up with that.”

Would anyone be able to?

If the 45th president of the United States was famous (or infamous) for anything, it was his harsh stance on immigration.

In 2018, the Trump Administration began the policy of separating children from their parents. In total, 4,368 children were taken and held in cages. There were no adult caretakers present, little to no nutritious food offered, and no opportunity to get clean clothes or bathe.

In March of last year, the Trump Administration passed Title 42, a law that allows the U.S. Border Patrol and U.S. Customs to turn away people who pose a “health risk.” While that might sound like a fair call to make during a pandemic, immigrant rights groups have explained that Title 42 is nothing more than another attempt to block land entry for migrants. Health officials have also spoken out against it, clarifying that migrants are in no way driving a COVID-19 surge.

When these sorts of news stories broke (as they did quite often), Democratic leadership was rightfully losing its mind, as were human rights groups across the country and the world. Throughout 2020, Joe Biden and other presidential candidates spoke about how inhumane the Trump Administration’s immigration policy was and promised to go in a different direction once in office.

So you can imagine the horror felt by human rights groups worldwide when the Biden Administration didn’t end Title 42. To this day, they continue to use it to expel migrants at a faster rate than the Trump Administration ever did. So much for open borders.

Likewise, child jail cells have become “migrant facilities for children.” No matter how many disturbing photos find their way out of these centers, the Biden Administration continues to claim (with a straight face) that they care about immigrant wellbeing.

So what gives? How can Democratic politicians claim one thing, then act in a way that completely contradicts what they just said?

It’s because despite what the mainstream media might have you believe, there isn’t much difference between modern Democrats and Republicans. Both support a capitalist system that prioritizes corporate wants over constituent needs. Both seem oblivious to the imminent threat of climate change. And, as the viral videos over the past few weeks show, both continue to support a draconian immigration system that fundamentally contradicts the supposed values of the United States.

While Republican politicians like Donald Trump, Greg Abbott, and Ron DeSantis give press briefings explaining how dirty migrants are bringing COVID, Democratic leadership operates a bit differently. Instead of linking immigrants to diseases and financial ruin, Press Secretary Jen Psaki promises a room full of concerned journalists that the administration will do better and that from this point on, local Border Patrol agents will no longer ride horses. Thank God!

Moments such as these highlight the absurdity of the current political duopoly. While Republican and Democratic politicians may disagree on decorum and surface-level details, their actions show that they’re largely the same. Both parties have a track record of raising a middle finger to Haitians and other immigrants for decades.

What the Haitian people need

After centuries of foreign meddling, robbery, and outright slaughter, the Haitian migrants at the border deserve so much more than a one-way ticket back home. They deserve the same opportunities that people from other parts of the world have enjoyed for centuries.

At the same time, leaders from the United States (and yes, other nations like Spain and France) need to take a serious look at how their actions have led to the situation in Haiti today. The Haitian people there need immediate assistance, and, as the United States is the wealthiest country on Earth, we can easily provide it to them.

After everything the U.S. has done to the world’s oldest black republic, lending a helping hand is the least we can do.

The Chinese People Are Pushing Back Against Authoritarianism. They Deserve Our Support.

As China protests against authoritarianism, its people need international attention and solidarity now more than ever.

Circe: A much-needed break from reality

Madeline Miller’s “Circe” combines everything from heroes and witchcraft to feminism. So how does it all mesh together?